Shannon Slaughter and County Clare is a bluegrass / acoustic country music band that features the award-winning songwriting talents of Shannon Slaughter as well as a cadre of outstanding musicians and singers.  Formed in 2010 by Shannon and wife Heather, the band has become a powerful vocal and instrumental force all over the United States as well as Canada.  Rooted in bluegrass and traditional acoustic country music, the band's strongest features are the  singing talents of Shannon and the band, soaring harmonies, and the original songwriting of Slaughter, who has garnered numerous Top Ten charted songs and three NUMBER ONE SONGS to his writing credit.

Elite Circuit Recording Artists, Shannon and the band have consistently been at the top of the bluegrass charts with their last 4 recordings; scoring three number 1 and numerous Top Ten songs.  This band believes in heartfelt original material and features tight-knit harmonies and superb lyrical instrumentation.

If you like your bluegrass served up in a traditional way with solidly written songs, run out and get this album. All the ingredients are here - well played guitar, bass, banjo, Dobro, fiddle and an occasional pedal steel. Songs about lost love, murder, ghosts, the strength of family, and Jesus. Gorgeous church harmonies, clear tenor voices, and a soprano voice as pretty as a spring day. Shannon sings lead on most songs although his wife Heather and others sometimes takes the lead. He's played with several bands and the experience shows with his expressive and smooth flatpicked guitar. The recording is clean, with every instrument coming through like a live recording. The album opens solidly with the title cut about a singer who'll steal your heart. There's an impressive guitar run to start things off, followed by an arrangement in the bluegrass style with most instruments taking a solo. "Stack Those Bodies High" offers vivid images of war, as does "The Hole," a song that tells the story of a soldier in the Civil War. "Lonesome Wind" also covers a dark topic, sung by a man who's murdered his sweetheart. Not all is deep and sad. "So Were We" is a heartfelt ballad that uses the images from photos to tell the story of a family, each section ending with "Life was good and so were we." No bluegrass album is complete without an instrumental featuring fancy picking and "Blitchville" is that song. One of my favorites is "Damn Short List of Things" where the clever lyrics outline the things he values, from trains to Grandpa, but none as high on the list as his wife. Speaking of her, Heather sings "Daddy Sang His Youth Away" and damn, I love her clear and expressive voice. "Running Kind" is about a guy who sings he has "leaving always on my mind." "Man He's Strong" starts with the tender image of a dying boy and ends with an homage to the strength of God. "Getting Older" features a sweet pedal steel and there's a lively fiddle on "The Devil's Broom." Finishing up the album are live recordings done with his family, including a gospel tune sung with his mama. You've gotta have a soft spot for a guy who records with his mama. And you've gotta love this album.© Jamie Anderson 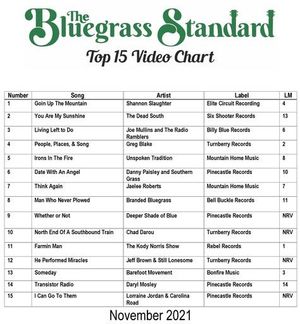