New Single: "Ridin' Through the Country" 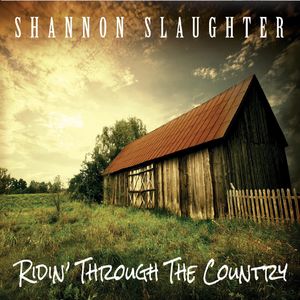 Trussville, Ala. (September 1, 2022) –Elite Circuit Records is proud to present the new single and music video, “Ridin’ Through The Country,” by Shannon Slaughter. The song is the title track of his recently released new album, available at all major streaming and purchasing outlets. Musicians on the track include Shannon Slaughter on lead vocals and guitar, Trevor Watson on banjo, Cliff Bailey on acoustic bass, Adam Steffey on mandolin, Aubrey Haynie on fiddle, and Shawn and Grayson Lane on harmony vocals.

“Shannon's love and respect for bluegrass music is evident here with his new single...always a pleasure to get to hear your newest batch of tunes brother,” said Aubrey Haynie.

The “Ridin’ Through the Country” music video was filmed in and around the mountains of southwest Virginia and northern North Carolina by videographer Spencer Roberts of Forged Film Company.

“I wrote this song after riding to work one morning and crossing a bridge over a railroad track with the train passing underneath. I just openly said, I wonder where it’s going – anywhere but here - and built the song around that,” explained Slaughter.

NEW ALBUM: Ridin’ Through The Country

(April 5, 2022) -- Shannon Slaughter announces his new album, Ridin' Through the Country, on Elite Circuit Records, is now available for streaming/purchasing and to radio programmers. For a limited time only, Slaughter is allowing music fans to set their price for the new album at his website ShannonSlaugther.com. The 15-track album features two original Slaughter tunes (“Ridin’ Through the Country” and “I Let Her Go”) along with seven co-writes.

This superb new project includes the latest radio single, “Common Ground,” which is #8 on the Bluegrass Today Weekly Top 20 song chart this week. Slaughter released an accompanying music video that is currently #3 on The Bluegrass Standard Magazine’s Top 15 Video Chart for March 2022. The first single released from the album is another chart hit, "Goin' Up the Mountain," named in Bluegrass Today's Top 50 Songs of 2021.

Musicians on Ridin’ Through the Country include Shannon Slaughter on lead vocals and guitar; Trevor Watson on banjo; Ron Inscore on mandolin; Cliff Bailey on bass; Aubrey Haynie on fiddle; Gaven Largent on resophonic guitar; Adam Steffey on mandolin; Jason Davis on banjo; Shawn Lane on fiddle and harmony vocals; Grayson Lane on harmony vocals; and Teddy Barneycastle on harmony vocals. Slaughter also features his family on the album with his wife Heather Slaughter lending her beautiful harmony vocals, daughter, Rae with lead vocals on “Come to Jesus,” and sons Jed and Call taking the lead on “Country Roads.”

Radio programmers can download the new album at AirPlay Direct, Get It Played, or request a direct download link. In addition, the album is available for streaming and purchasing at all major outlets, including Spotify, Apple Music, Amazon, and more. 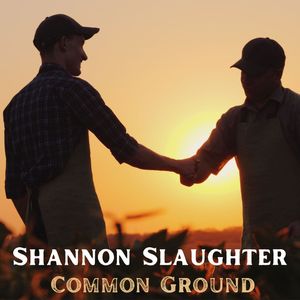 (February 16, 2022) -- Shannon Slaughter is proud to announce today's new single and video release, "Common Ground." The song appears on his album, Ridin' Through the Country on Elite Circuit Records, releasing later this year. The new single comes on the heels of his Bluegrass Today chart hit, "Goin' Up the Mountain," named in Bluegrass Today's Top 50 Songs of 2021.

“This David Stewart and Linda Buell composition struck me the first time I heard it. I got to spend a little time with David in his hometown of Buffalo, Wyoming and he played this for me while we were riding up through the Bitterroot Mountains,” explained Slaughter. “It really typifies how I feel about life in general because we all deal with obstacles and challenges in some way and we're all looking for solutions and answers. It really helps to know that we're not alone.”

Coinciding with the single release is the new music video for “Common Ground.” It was filmed in and around various locations in Southwest Virginia. Some scenes were filmed at Eastwood Studios, where Slaughter records with engineer and studio owner Wes Easter. “Wes has been instrumental in my solo career as well as my previous career as a sideman.  All told, I've recorded or been a part of 11 records that have come out of his studio,” said Slaughter. The video is available on YouTube, Facebook, and ShannonSlaughter.com.

Radio programmers can download the new single at AirPlay Direct, Get It Played, or by request for a direct download link. In addition, the song is available for streaming and purchasing at all major outlets, including Spotify, Apple Music, Amazon, and more.

New Single: “Goin’ Up The Mountain” 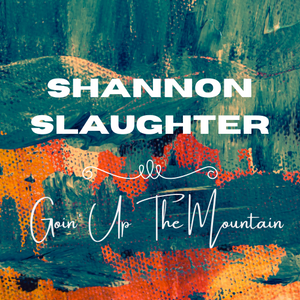 Nashville, Tenn. (September 3, 2021)  - Shannon Slaughter is proud to announce today's new single release, "Goin' Up The Mountain.” The tune, written by Chris Burton and Shannon Slaughter, appears on his upcoming album, Ridin' Through The Country on Elite Circuit Records.

"This is my tenth year as a solo artist, and I'm so proud of this new single," said Slaughter. "The tune's hook is a commonly used phrase from VA/NC/KY/TN area when folks are leaving the flatland headed up to the high country. It really spoke to me and reminded me of my younger years living in Radford and Meadows of Dan, Virginia."

Slaughter achieved significant chart success with his previous album including, "The Devil's Broom" from Hold On To Your Heart and two #1s singles on Bluegrass Today Top 20 Songs chart with "That Old County Road" and "He Moved A Mountain" from the album Never Standing Still.

"It was a real treat to get to be a part of this new project that Shannon has put together. He always finds or writes songs that seem to resonate with me. This is another in a long line of terrific tunes he's recorded that I think is just killer. I believe you will too," said Adam Steffey.

Shawn Lane agrees, saying, "Shannon never fails to plow deep in the field of creativity. 'Goin' Up The Mountain' is a great result of that. Listen, and you'll see what I mean!"

Radio programmers can download the new single at AirPlayDirect or send a request to penni@hoperiverentertainment.com for a direct download link. In addition, the song is available for streaming and purchasing at all major outlets, including Spotify, Apple Music, Amazon, and more.

New Single: "You Better Hold On To Your Heart" 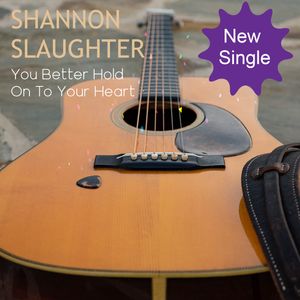 “I first heard this song on Lou Reid’s ‘When It Rains’ album in the early 90’s and it was a seminal record in my entrance into bluegrass music.  I recut it and brought Lou to sing harmony paying homage to him as one of my vocal heroes.  Old Lou Reid & Carolina alumni and two of my very best friends Trevor Watson and Ron Inscore shine on this Wes Golding original.  I hope you enjoy it,” said Shannon.

The first single release from the album was “The Devil’s Broom” written by Shannon Slaughter and Mark “Brink” Brinkman.” The song spent many weeks on the Bluegrass Today Weekly and Monthly Top 20 Song Chart since the song’s release last December.

Radio programmers can download the new album including the new single  “You Better Hold On To Your Heart,” at AirPlayDirect or send a request to penni@hoperiverentertainment.com for a Dropbox or Google Drive link.